Coincidence is a fascinating concept: I just finished lecture 11 "testing and debugging" of MIT's interesting CS course yesterday and had an amazing example in practice today.The coincidence was a bug that was identified in an app I wrote. It did not make any sense at first: some data was written that had nothing to do with the expected data. I could not guess where it had come from. I started to look at the function responsible for writing that piece of output. As the mentioned course states: "reading" your code is very important, but you can easily get into the habit of just take things for granted. 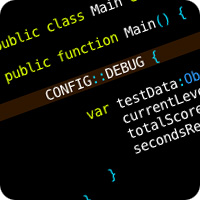 Trying to understand the function I quickly saw the specific output got written to a temporary file first. You see, as code grows and apps age, you often forget the inner working of each and every function.

The thing to remember when debugging is that you need to be SYSTEMATIC. In the course a great example is shown of the binary search approach (the "Silly" program): start in the middle to rule out half of the code. Of the half left, start again in the middle, etc.

I started to look for a pattern to see when this bug might had slipped in. Having complete statistics (thankful now), and starting somewhere in the middle of last weeks uses, I was quickly able to pinpoint the exact time and date when the issue started.

Then I asked: "what changed around that date?". I started to think and talk to people involved: there was a permission change of the temporary file that got written to! A quick test script confirmed I could not overwrite the temp file anymore! Bingo!

The course and the real-life example thought me some things:

As John Guttag says in the course: "defensive programming is all about facilitating validation and debugging!" And with that you prevent future head aches :)

... be patient, analyzing a bug can take hours, sometimes even days if you (wisely) walk out from time to time. However I found the process much satisfying, intriguing even. I mean applying a systematic approach to narrow down an issue step by step, I think it is in the programmer's nature to just love that :)

You can also join my Facebook group or get a weekly Mailchimp newsletter to keep up with my new blog posts. You can subscribe in the sidebar of this site ...