I like to solve common day problems, at the same time learning more coding. Learning to code is all about practice. Today I show you a Perl script to get a daily email listing all movies broadcasted by Spanish TV in the coming 24 hours. 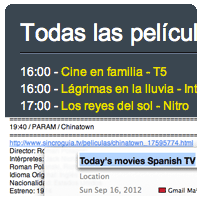 I tried to do this some time ago - BeautifulSoup is very powerful for html parsing, but with the typical tv guide I had to rely on a class "cine inactiu" to filter the movies out. This worked pretty well, but it was not complete and as the movie names are in Spanish I linked to imdbapi for more info which usually did not yield any result. So I needed to redo this exercise ...

I didn't start scripting. First I looked for a better source which I found. This page does half of the work finding all movies to be aired today on Spanish TV. Usually it is not necessary to code everything! What I wanted to add on top of this was:

Some notes / things I learned 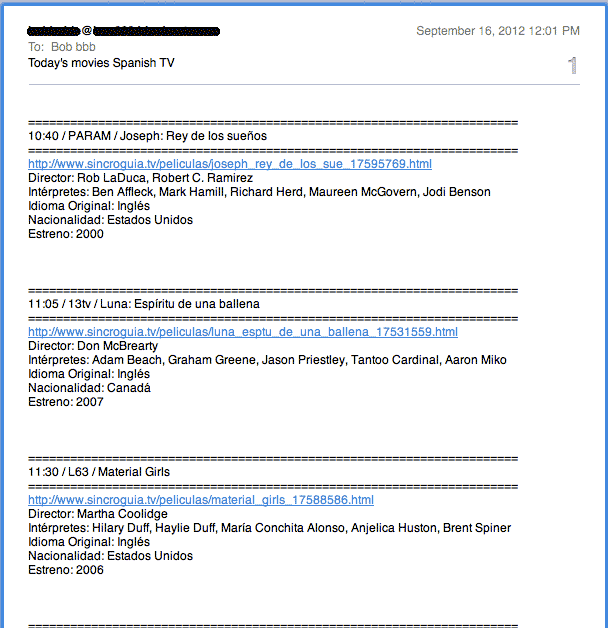 Having the time coded as hh:mm, Apple mail recognizes this and when clicking it you can add an event to your calendar. This way I can easily put a reminder of a movie I potentially want to see later in the evening.

The movie page does not always give the English movie name and sometimes it has a generic term like "La película de la semana" which doesn't give any clew. So I did some more parsingto include the movie name, original name and plot info. I also included the Twitter and Facebook sharing links which are on each movie page at the bottom, example: