In this posts some notes on installing Ruby and RubyGems on Bluehost, my hosting provider. While I was writing this I also tried it on Solaris 11 and Ubuntu 12.10 as a regular (non-root) user. So now I can deploy the latest version of Ruby to most places I push code to.

Of course this only makes sense if you want to have the latest version or if Ruby is not installed at all and you have no sudo / root rights. For Ubuntu I usually have full access so running an "$ apt-get install ruby" would be all it takes. For Bluehost I obviously don't have root access, for Solaris usually the same. Bluehost does come with gem 1.7.2 and ruby 1.8.7 out of the box. Learning Ruby I want to make sure though I can use the latest version on my local- and remote hosts, hence this post.

!! Although this worked perfectly as a user on Ubuntu and Solaris, on Bluehost this failed. On a hosting box it might be better to run the following commands which I found here: 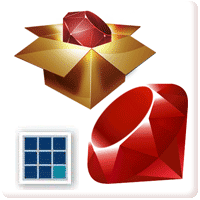 If this is your first Ruby installation you can just append it to the end, if you have multiple instances, like I had on Bluehost, you might prepend it so that the shell looks first at the Ruby binary you installed with your user account. For dealing with multiple Ruby versions on your box, you might want to check out Ruby Version Manager as well.

If you don't want to mess with the PATH variable, you can also create aliases:

The libyaml error didn't get in the way so far, but usually it is better to solve any errors ... I got this error on each Unix flavor (as a user).

/usr/lib/ruby/gems/1.8 is the default gems location, if this is the first installation just leave this off.

!! Note that on Ubuntu you might get the following error which means you have to install zlib ($ sudo apt-get install zlib1g-dev) :

And that's it. Now I can write Ruby 1.9.x scripts knowing that they will work on my remote servers because I will simply install the latest Ruby version as my user.