Rails 3 is out, but version 2 is still widespread.
I have > 1 computers but I prefer to develop on one.
Inevitably the question arises: how can I develop in rails 2 and 3 on 1 machine?

RVM is a command line tool which allows us to easily install, manage and work with multiple ruby environments from interpreters to sets of gems.
So not only is it convenient for rails 2 vs 3, but any new update that comes out can easily be tested this way.

Most of the following procedure comes from Michael Hartl's Learn Rails by Example that now covers rails 3 and is an excellent tutorial!
Quick procedure how to set it up and use it:

.. and put this in your profile:

2. install the Ruby instances you want:

3. define two gemsets, basically self-contained workspaces between which you can toggle

4.  make sure you have gem (Ruby's package manager) installed. It should come with RVM already.
I had some strange issues when installing gems. I think I used somehow the global gem's binary, so you might want to put the RVM's gem binary earlier in your PATH (adding ~/.rvm/rubies/ruby-1.9.2-p0/bin/gem to $PATH in for example .bashrc)
5. now you can easy toggle between the two environments

etc.
You can even run both versions at the same time if you specify a different port 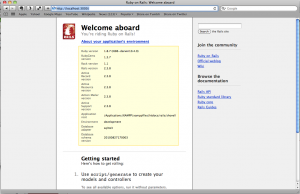 OK, this Wednesday a new edition of my Web spotlights ... Apture, itunes ping and more stuff ..