A simple script to archive your tweets

Twitter's search API only goes back 6-9 days. In this post I explore a way to get my full twitter history to quickly search for what I tweeted. This way I can keep using Twitter as a way to not only share but also as a reference tool for things I am learning. 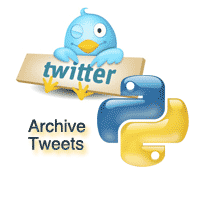 There are good solutions out there to get your tweet history, see this article for example or snapbird. So there is no lack of tools, but as usual, I want to give it a try myself :)

Besides, if you want to have full control you might want to consider importing your tweets yourself. This post is a first attempt but let me say upfront that it is far from done. It is an idea to be further worked out. The nice thing is that you get a bulk of data back which is good material to ask and solve many questions your own way:

All those questions you get probably answered by online apps around Twitter, but hey ... it's a learning excercise as well. An important limitation is that you can get max. 3200 tweets, for me that is ok, because I am still far below that number. It is still a lot of data though :)

Note that user_timeline shows 200 results as max, but that doesn't mean you always get that number. I found out it is safer to just query more slices of 100!

Ways to enhance this script

I did play around a bit more

This is one of the apps you could make with this data. I did a quick import (just text-based, so not putting it here, because the official way to go is really with "prepared statements") into mysql and I built a quick autocomplete with php, jQuery etc.:

I get my tweets instantly when I start typing and when clicking on a particular tweet, it will redirect the status page with the tweet: